It is the ninth day of the holy month, and the third week of the journey. Once I arrive at the next destination, it will be even more difficult to communicate with the locals. Even in Tehran I did not meet anyone who speaks English. Body language will help, albeit in some regions it can lead to very undesirable misunderstandings. For instance, raising the thumbs in Iran traditionally has a very insulting meaning. Although many Iranians are familiar with the positive meaning of the raised thumb, the negative association has remained unchanged in more rural and conservative areas in particular. For a moment I imagine a Western hitchhiker on a highway in Iran, raising his thumb whenever he sees a car, hoping for a ride. In many cases, it would be like hitchhiking in Europe and showing the middle finger to every car that flashes by, waiting for somebody to kindly pick you up. One could imagine how after countless attempts to be picked up while raising the thumb, a car would eventually pull off, mistakenly making the hitchhiker conclude that finally somebody is so kind to pick him up, only to get beaten up for continuously insulting all the car drivers. The unlucky hitchhiker would never understand why most people who have visited Iran talk about the exceptional hospitality for which the Islamic Republic is known.

While I am on my way to the next destination, a local that I meet in the bus once again reminds me of what "Mehmanawaz" (hospitality) really means, giving me some snacks so I have something to eat for Iftar, and once again tempting me to raise the thumb in appreciation, until I remember that this can be perceived as an insult. No wonder that Facebook is banned in Iran, with all its "thumbs up". What if people in Western countries created an account in a social network that was full of middle fingers, a social network where you receive more and more middle fingers, the more other users "like" your posts? Giving it a second thought, it would perhaps not be as scandalous as in a country where traditional values persist.

Facebook Ban in the Light of Iran's National Security

But the reason for banning Facebook is of course much more complex, and this is not solely a religious issue in Iran, but a matter of national security. Just like in China, banning certain websites such as Facebook is seen as a means to fight cultural imperialism, or to be more precise, to fight the potential threat of foreign intelligence apparatuses who may use such websites as a tool to gather sensitive information and to influence public opinion. Many people in Iran find ways to use Facebook and crave for the benefits that the social network certainly has. Despite the fact that many Iranians do use Facebook, the limited access also limits the possibilities of foreign cyber infiltration in Iran. The Islamic Republic is of course not immune to cyber attacks, as the Stuxnet attack has shown, but the more restrictive access may very well be one of the contributing factors why in in Iran there is still a relative stability, as opposed to countries like Lybia, Ukraine or Egypt, who would all fall victim to coup d'etats with dangerous implications in the following years, not to mention Syria, where a devastating civil war would break out only one year after its government decided to lift the Facebook ban.

Apart from intelligence operations and PR campaigns via social networks, one may also wonder how a country that aspires population growth, a country that emphasizes the importance of the family institution, feels about Facebook's contribution to an increasing divorce rate. Moreover, who would be surprised about some countries banning Facebook, bearing in mind all the controversies revolving around privacy on the social network? Unless the Iranian people put more pressure on this issue, even stronger precautions may be taken in the future, if we bear in mind how years later it would be revealed how Facebook experimented with the emotions of hundreds of thousands of users without their agreement, reinforcing the view, whereas the famous social network can indeed collectively affect a society.

The next "stair" should be near. A city that was made famous by none other than Ayatollah Ruhollah Khomenei, the founder of the Islamic Republic, who studied at the Qom Hawza. But my arrival in Qom would take longer than expected, because even hours later, we are still driving, so I decide that I will take the next opportunity to get off the bus. The sun goes down. It is time to find something to eat and to drink, but once we arrive at the next bus station, I realize that it could take a while to find a store that is open. Then I spot a sign and realize where I am at. "Arak", a city that has become known in Western Media for a heavy water reactor. The international community, or to be more precise, politicians who call themselves "the international community" (118 States actually support Iran's nuclear program) have repeatedly accused Iran of building nuclear weapons. The most vocal accusers were states that actually possess nuclear weapons. In case of the reactor in Arak, Iran's government has been accused of building a plutonium bomb. The Iranian government denied such claims, stating that it is planned to produce radioisotopes. Iranian politicians from all ranks have always stressed the civil nature of its nuclear program, often referring to a Fatwa, according to which the development of nuclear weapons is haram. Deviations from the peaceful program have never been found, neither here in Arak, nor anywhere else in Iran.

After taking a look around at the bus station in Arak, I figure out that the only people whom I can ask for information on the bus schedule, are the two men at the counter, who regulate the traffic. Despite the language barrier, we are able to communicate. They let me know that soon a bus to Qom will depart. Meanwhile, I ask the two men for a local restaurant, after which they realize that I fasted today. Both of them forget everything around them and first make sure to provide me with food and drinks. Before the bus arrives, one of them hands me a Persian-English dictionary as a gift. Late at night I check into a budget hotel in Qom, which not surprisingly lacks the standards that many of us spoilt Western tourists are so used to, because in these days, due to the ongoing tensions between Iran and some Western governments, the Islamic Republic is not really being promoted as a tourist destination. Near the hotel lies a mosque, where I take a picture that would turn out to have a very important function soon.

It is the tenth day of Ramadan. With a dry mouth and heavy legs I walk around, trying to get used to this completely new environment. For a while I look at some women, all of whom wear headscarves, as is legally required in Iran, and I'm amazed at how easily they manage to cope with this weather while fasting, whereas I am not used to this hot and dry climate. Black is not really the most desirable color to wear in this weather, but at least their chadors protect them from the blazing sun. In front of me I spot a water-tap. The thirst is debiliating me. Half of the day is over. And one third of Ramadan is over. There is no way that I will give in now. In such a condition, pouring the cold water on my arm and on my face almost feels as redeeming as drinking it.

After this refreshment, I focus on the site that I have finally reached: The Jamkaran Mosque that is situated near Qom. For Shia muslims, this mosque has a special meaning that is connected to one of the key figures in Islamic eschatology. Among locals it is believed that Imam Al-Mahdi, who - much like the Maitreya in Buddhism - is seen by Muslims as a figure that will return to reform the world, once appeared at a well at the Jamkaran Mosque along with the mystic figure Al-Chidr. According to Shia belief, Imam Al-Mahdi ("the guided one") has been in occultation for over 1000 years. With the exception of some Islamic movements such as the Ahmadiyya, who believe that Imam Al-Mahdi already appeared in the 19th century, most Islamic schools agree that Imam Al-Mahdi will return to fight the one-eyed Dajjal, the false messiah, before another figure will reappear and join Imam Al-Mahdi to fight the evil forces, a return in which Christians believe as well: The return of Hazrat Isa, in the West better known as Jesus Christ.

The Shrine of Fatima Al-Masuma

If there is a site in Qom that can outshine the Jamkaran mosque, it is the shrine of Fatima Al-Masuma ("the innocent"), who was buried here in the 9th century before the city was founded. According to Twelver Shia belief, Fatima Al-Masuma was a descendant of Prophet Mohammad, the daughter of the seventh Imam and sister of the eighth Imam. The tomb of her brother is to be found in Mashhad. Before passing the shrines, the locals usually say a prayer, gesturing with their fingers like many Christians do when they make the sign of the cross.

After all these impressions, I have even more questions than answers in mind, but before dealing with cultural or theological questions, I need to find an answer for a completely different question: How do I get back to the hotel? I forgot to write down the address of the hotel. I do not even remember the name of the hotel. Nobody speaks English here. I knew I should have taken the English-Persian dictionary with me that I received in Arak. The locals provide me with all that I need and I still find myself in such situations. After several failed attempts to communicate with some people on the street, I realize that the language barrier is too big.

For now I enter a taxi, hoping that the driver will take me to a place that could seem familiar to me. The driver asks me where I want to go. The only orientation point that I have is the mosque across the street of my hotel. "Masjid" will of course not suffice as a description in an Islamic city that is full of mosques. But I remember the picture that I took the previous night. After showing him this picture, the driver recognizes the mosque and I feel relieved as we arrive at the hotel. Not sure how I would have made it back to the Hotel without the picture of the mosque, but right now I again have a completely different question in mind: What Persian meal should I have for Iftar? 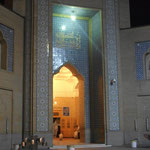 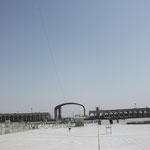 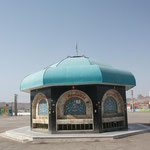 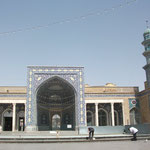 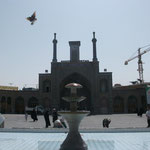 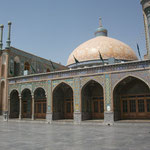 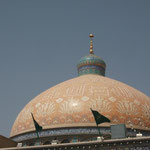 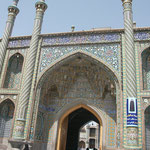 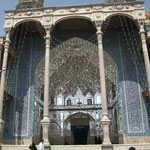 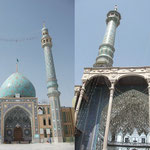 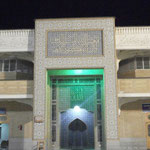