The officer at the passport control utters four words that start to make me feel uneasy: "Sir, your visa please" - Prior to the trip I checked if I need a visa very carefully, and it was very clear that it is not required for German citizens. "I have no visa, and I am pretty sure that I don't need one" - "Sir, it is a new regulation." - "Since when?" - "Since the 1st of May, 2010". Damn, I'm a few days too late. Today is the 4th of May, 2010. Talk about bad timing. For a couple of minutes I am standing there speechless. Meanwhile, the officer talks to his colleagues. It is with big relief, when he returns to utter his last four words to me: "Sir, welcome to Qatar".

"Where do you want to go?", asks me Mohammed, the taxi driver that I meet at the airport. "Some cheap hotel", I reply, knowing that I won't find any hostels in Doha and that I will have to spend more money for accomodation here than in the previous destinations. Everything went so fast the last couple of weeks that I totally forgot about checking any places to stay in Doha in advance. Mohammed happens to be a  helpful guy and even offers me to stay at his place for free if we don't find a hotel that I can afford. However, it is the last place we check, the Diamond Hotel, where I receive a 20% discount by the friendly people who work there, which I thankfully accept. 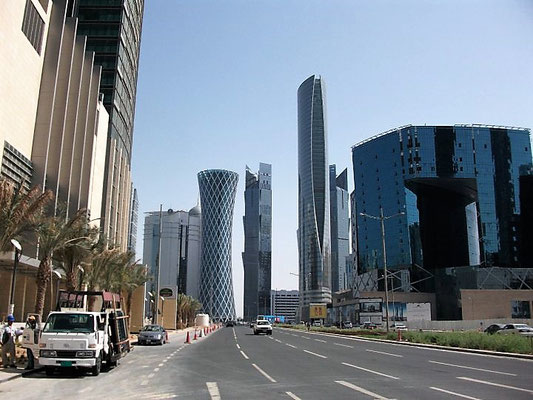 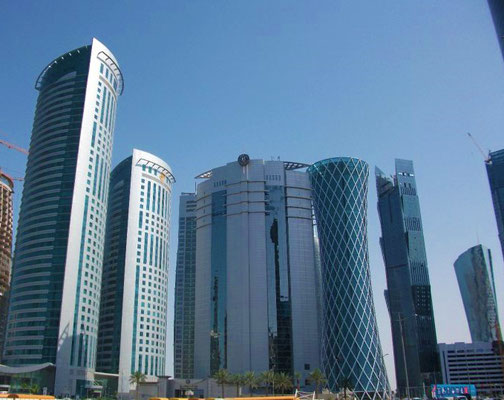 I may still have spent eight times as much money for accomodation than I did for staying at a hostel in Kuala Lumpur, but at least for groceries I will barely pay anything, I realize while looking at the price tag below the cans of Pepsi in the store: Ten cents. I probably will not have to worry about monkeys stealing my soda here in Doha either. Outside the grocery store I look at the direction from which I came to get some orientation. It should be easy. "Just walk straight all the time", the man at the reception said, explaining to me how to get to the coast. I only asked for the coast because I don't know what else there is to see or do in Doha. Of course you have deserts here, too, but I have already had my desert experience in Dubai. Just like Dubai, Qatar was one of the countries that were offered as a free stopover. So, what am I going to do here? This is not an easy question, I quickly conclude on my way to the coast.

Because I barely find any pedestrian signals and the cars relentlessly keep on driving while I try to cross the big streets, I start feeling like that frog in the video game frogger, where the only goal is to cross the other side of the street without being run over by the cars. On the drivers' seats I don't spot one single woman. Probably they are not allowed to drive cars here either, much like in Saudi-Arabia. But even on the streets I don't spot any women. Most of them are at home and in the mall that I enter next. I knew that Qatar is much more conservative than Dubai, but probably even more restrictive than in Islamabad as well. Compared to Pakistan's capital, wearing Hijab and also Niqab is certainly more common here in Doha.

This place is so unlike all the other places that I have visited. Soon I realize that here in Qatar's capital I have felt something I haven't felt on my journey around the world so far: Boredom. Sheer boredom. I knew in advance that this would probably be the least flamboyant destination of all the ten countries. Of course I knew that nightlife here is almost non-existent as well. But apart from that, the way I feel right now reminds me of looking at a variety of drawings that are rich in detail, pieces of paper filled with a diversity of colours and patterns, after which you eagerly anticipate the next drawing, only to be presented a piece of paper that is almost empty, without any colours, almost completely incomplete, as if the artist has only started drawing the picture. This is how I feel here in Doha, only to a much higher extent accordingly, being more than halfway through flying around the world and bearing in mind all the sights, adventures, and inspiring moments of the previous countries only to have ended up here in this dull place.  Very obviously, the small gulf state is only beginning to build its capital in a more ambitious and inviting manner. 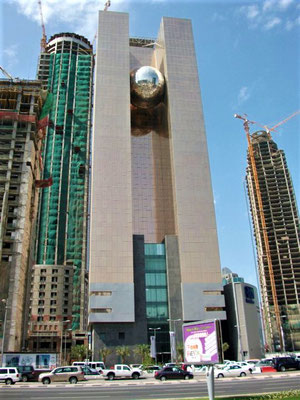 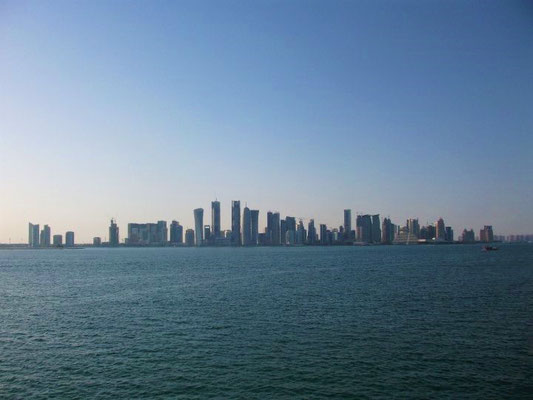 Soon I reach the coast, where I finally see something that I find interesting. On a small artificial island I spot a building that easily draws attention to itself with its geometric patterns in this otherwise inconspicuous environment, making me wonder what is inside. As I begin to approach the building, the guard promptly dismisses me. What a pity. So, I just watch the sunset at the "Arabian Gulf", as it was called in a promotional video on Qatar that I watched prior to the trip on Youtube. This is obviously a politically motivated denotation, since historically speaking, it has always been commonly known as the Persian Gulf. Apparently, a number of Arab states propagate the term "Arabian Gulf" to increase their influence, something that Iran will certainly not appreciate.

In a weird way I begin to realize how this absence of excitement in Doha is like a blessing in disguise, not only because I begin to feel that this is exactly what I need after all the fast-paced adventures of the last couple of weeks to recover, and not only because it gives me time to self-reflect. Paradoxically, this boredom feels kind of interesting to me, because the monotonous environment challenges me to think and feel things in different ways, to dig deeper. Because there is so little to see and do here, I start to think about things in much more detail than I usually do.  For instance, if this place was not that uninspiring, I would probably not even think about the muezzin's affinity for chromatic sequences as he is singing the azhan, something I haven't heard in the context of Muslim prayers to that extent before. I guess boredeom can indeed prompt you to think about things you hadn't thought about before.

On my final day I have just one mission. Even if I will arguably remember this as the least spectacular part of the trip, I still feel like there must be a way to create a memorable moment here in Doha. The only thing that I found interesting here was that building on the small artificial island, on which I am walking again. They may not allow me to enter, but at least I can have a closer look. As I get closer to inspect the edifice, I notice that this time the guard is not dismissing me. So, I walk over to him. "Is it possible to enter this building?" - "Yes", the guard says confused. "Because yesterday I wasn't allowed to." - "Maybe you came when it was closed?" - It must have been after 6 pm. That makes sense. "What is in this building?" - "This is the Musem of Islamic Art". 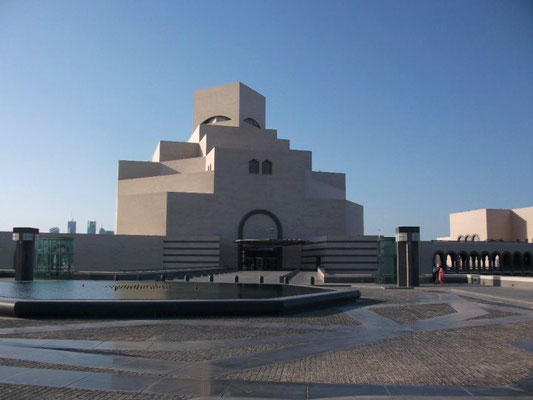 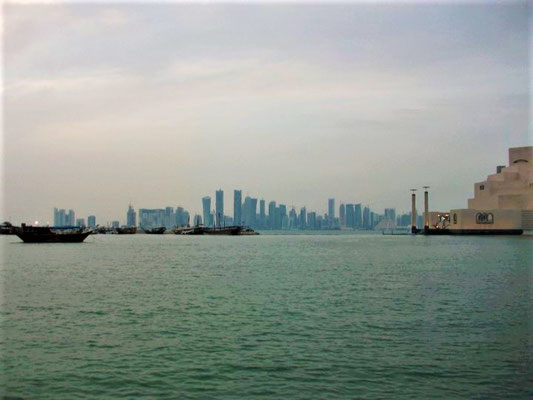 "Really? How much is the entrance fee?", I ask amazed. "It's free", the guard says. So far, apart from the Universal Studios museum, visiting a museum on this around the world trip felt more like "something a traveller must have on his check list", it felt more like something that others expect you to do as a traveller than something you really wanted to do. I always felt that I would enjoy visiting a museum if I have at least a little bit of background knowledge of the respective theme or if I am at least legitimately interested in the theme and not visit a museum just to convince others that I am a smartass. In this case it is different, and not just because it is a nice looking building. 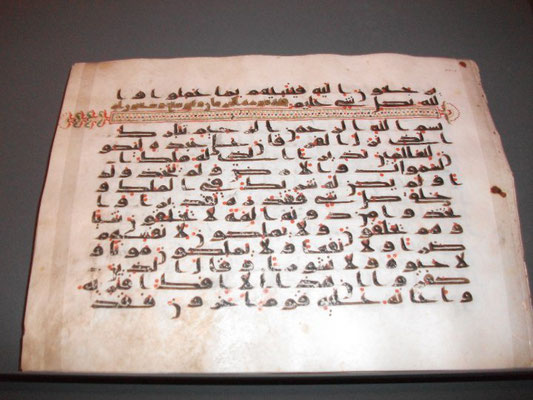 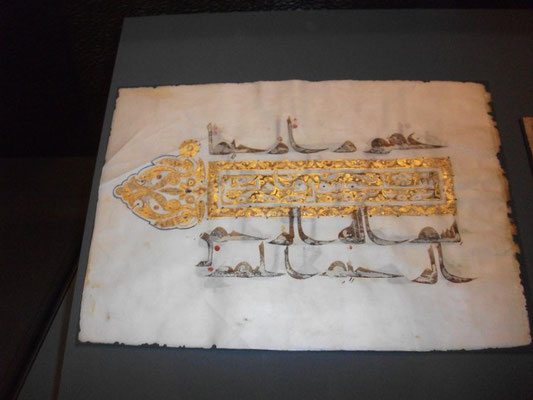 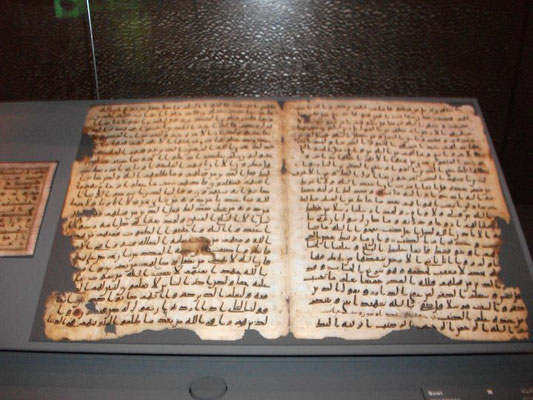 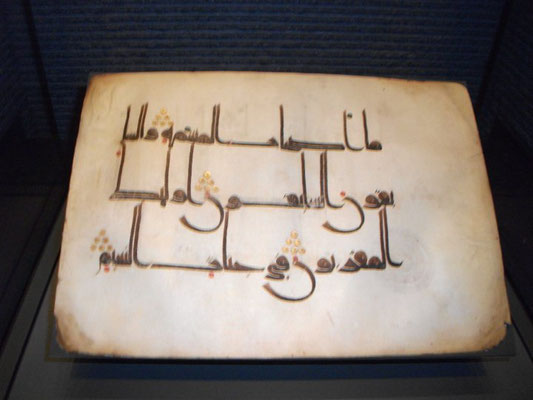 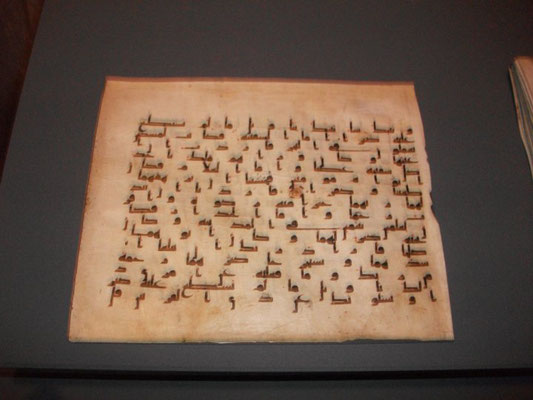 A diverse collection of ancient manuscripts, even dating back from the seventh century and not too long after the death of prophet Mohammad, is what I focus on the most. In this moment I am glad that I was taught to read Arabic as a child, even if it was unwillingly, and even if deciphering the ancient Hijazi scriptures in this museum still turns out to be very difficult. Apart from the scriptures, various ancient art works, carpets and jewelry from the Islamic world are put on display. Moreover, I learn a little bit about the building itself. It was designed by one of the world's most renowned architects, the same person who - among many other famous works - controversially designed the Louvre Pyramid in Paris, Ieoh Ming Pei. He came out of retirement for this project in Doha, his final work so far. No wonder that I felt attracted to this building in the first place.

Once I am through with the Musem of Islamic Art experience in Doha, I conclude that there is not much more to do here. But wait. Maybe there just one small thing that I could do here, because in the upcoming destinations I will probably forget about it again. The monotony here in Doha is perfect for those who like to practice their religion more zealously. There are no distractions, no temptations.  After observing a cockroach for over an hour and thinking about the meaning of life, just because I didn't know what else to do, I finally decide to pray. In order to do so in a correct manner, I need to find the Qibla, the direction that Muslims have to face while praying, no matter where they are located on this planet. It is the direction that points towards the Kaabah in Mekka, the holiest place for all Muslims in the world and the one place that every Muslim who is capable of doing so should visit at least once in their life, a thought that is rather frightening to me. A green arrow above the door of my hotel shows me the direction, in which I subsequently pray for the typical things that humans pray for, that the people you love are doing well, that you are healthy, successful, happy, and of course I pray for what is coming up next, because my next destination will be in the opposite direction of where I pray. And even though the next destination is a Muslim country as well, everything is going to be so different again, because I am about return to the secular world, and I am about to return to Europe. 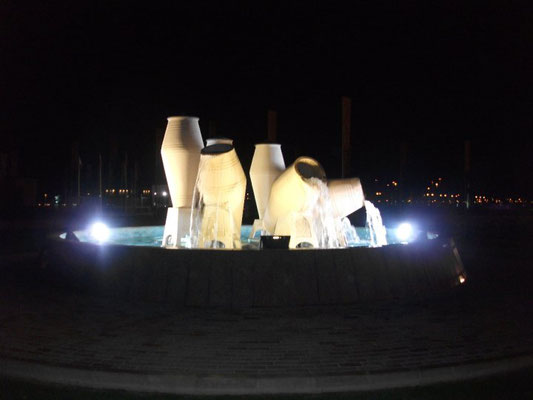 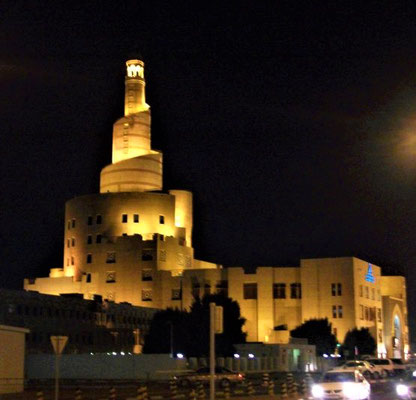 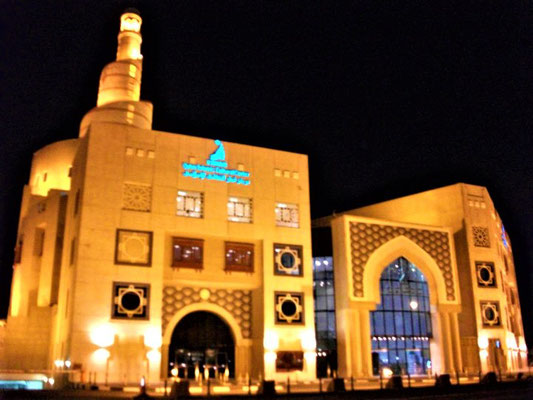