On sunday, the night after partying excessively in Hollywood's Whisky a Go Go and other clubs, I prepare for the next flight, the longest flight of them all, taking me to the second country of the around-the-world trip. Between Melbourne and Los Angeles there is a time difference of 17 hours, and the duration of the flight is sixteen hours, which is why I arrive only two days later and feel like the 12th of April, 2010 never really existed in my life, as if I just travelled to the future. At the airport of Australia's cultural capital I meet my cousin, whom - much like all my relatives in Pakistan - I haven't seen for 14 years. She introduces me to her husband Saleem and their children. We get to know each other better once we reach their apartment. Too jet-lagged and excited to fall asleep, I soon decide to explore Melbourne. 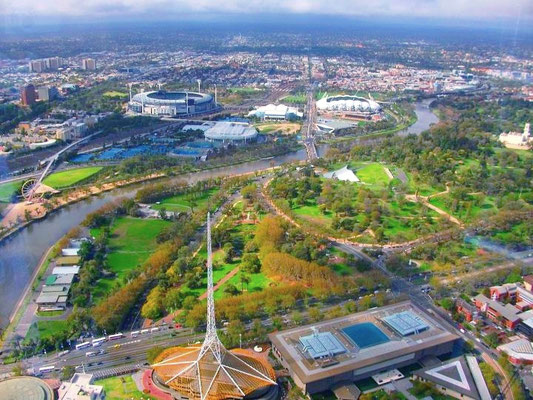 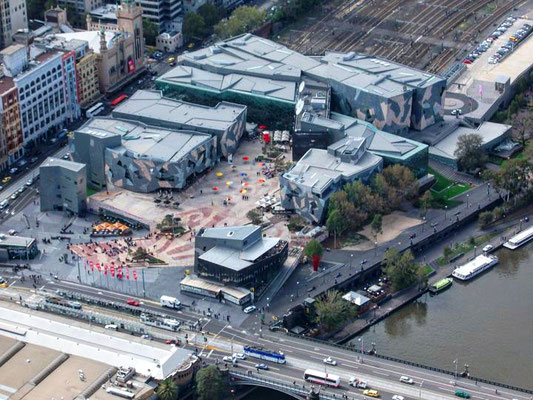 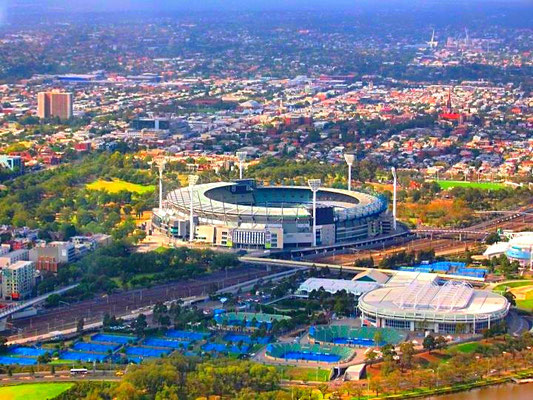 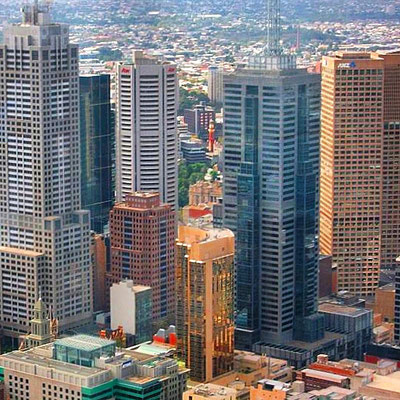 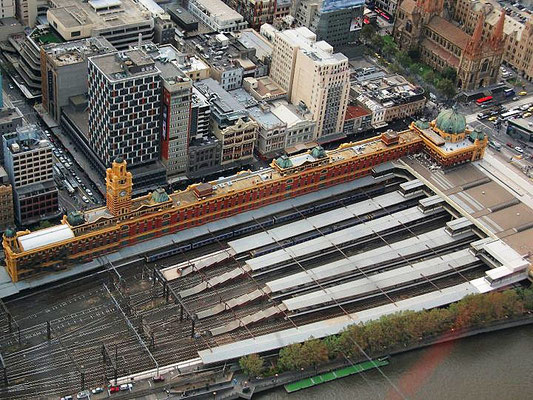 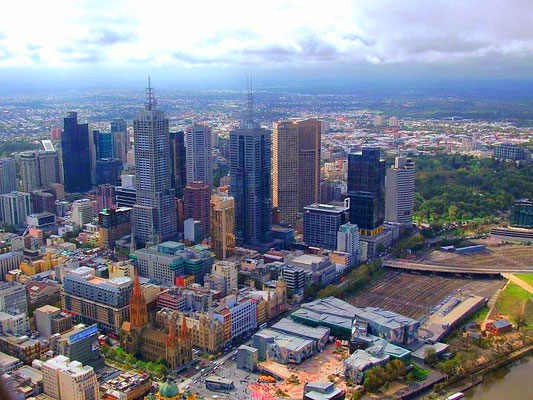 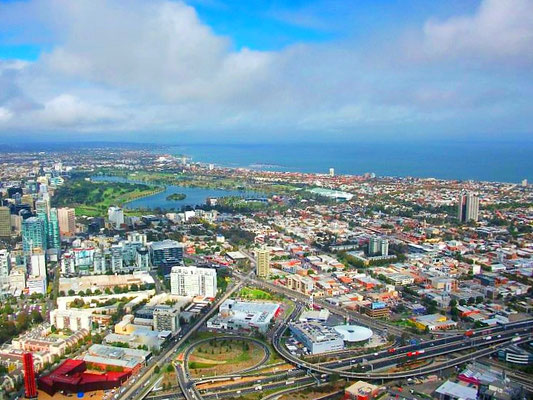 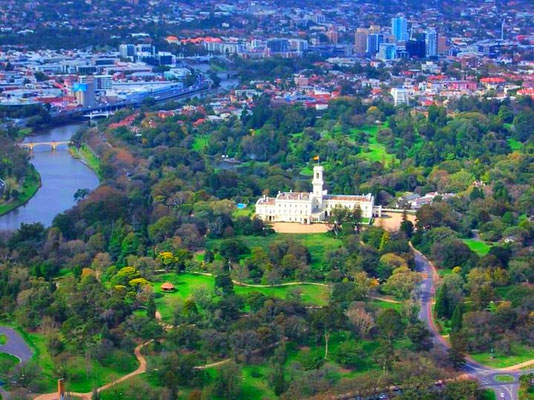 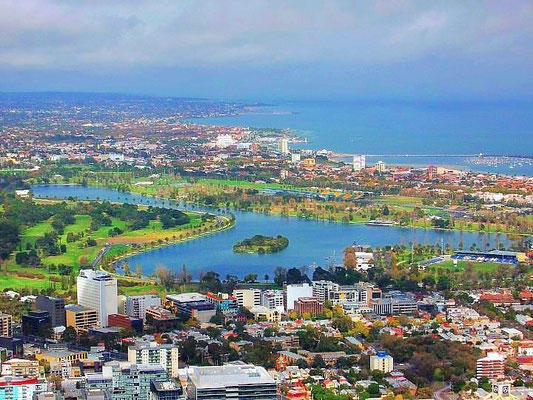 The first stop is the Federation Square, where I inspect the unique edifices, while occasionally being distracted by various street artists entertaining the passersby, most notably the big group of old men in suits who walk down the street with an exaggerated and theatrical expression of confidence while performing A Capella. Apart from a lot of artists I also notice that many people are giving away flyers trying to sell cards for international phone calls, which is also not a surprise. Naturally, the demand is very high, bearing in mind that at least a third of Melbourne's population was born overseas and people from all kinds of countries live here, usually having relatives in their country of origin, most notably from China, Ireland, Italy and India.

Enjoying the view on Eureca tower's skydeck is a great way to get some orientation, I conclude, as I look at different spots and landmarks, some of which I will surely have a closer look at in the next days. Standing out in Melbourne's cityscape are various structures and places such as the Melbourne stadium, the CBD buildings, Herring island or the Federation Square that I visited earlier today, whose modern, deconstructivist style stands in stark contrast not only with the many Victorian buildings, but especially with the Flinder Street Railway Station, another very eye-catching landmark designed in the style of French Renaissance. 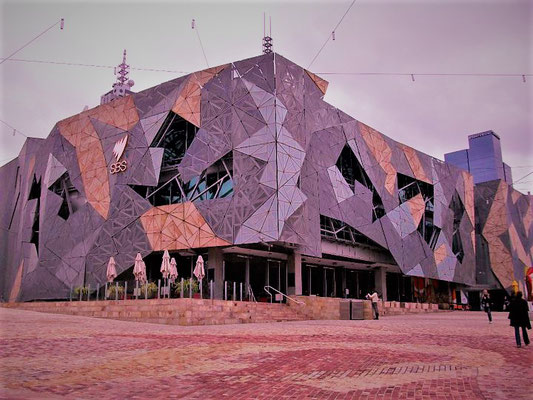 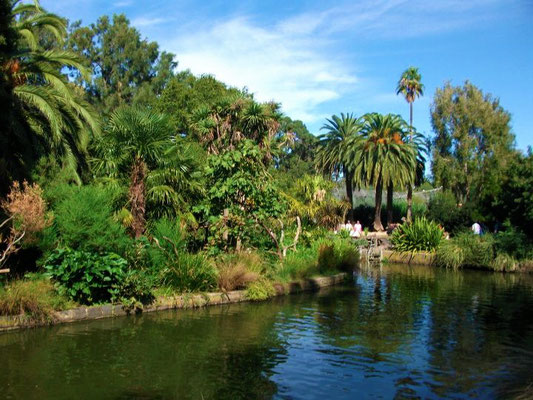 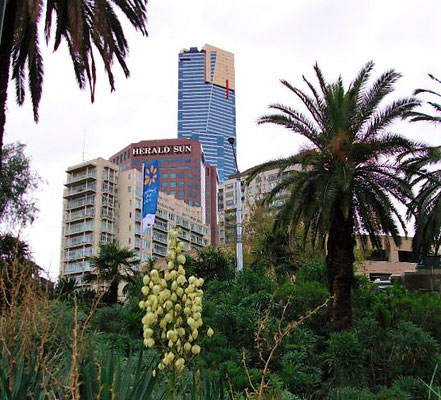 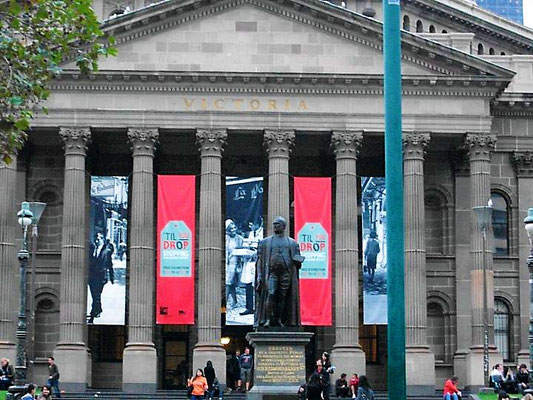 In a bar I hang out with a local, who complains about the expensive university fees in Melbourne. Generally speaking, however, Australians seem so laid back to me, and even high university fees don't change anything about it. In Germany, after the comparably low fees of 500€ per semester had been introduced a few years ago, students started protesting nationwide. I was among those people on the streets in Frankfurt protesting against the fees. Fortunately, our region became the first region in Germany offering free education again.

The conversation with the local revolving around university fees reminds me of my master thesis that I still have to finish. Because of curiosity rather than feeling pressure I decide to enter the State Library of Victoria Library to see if there are any useful sources. However, I don't stay too long in that neoclassical building and instead decide to sit down on a bench in front of the library to take some notes on my travel adventures so far, when a Korean approaches me and starts a conversation with me. Once he starts talking about God, it is no longer hard to guess what he is up to. The next couple of minutes I am patiently listening to the Witness of Jehova, until he finishes his sermon with the sentence: "God is like air. You don't see him, but he is there!"

I look at the Korean guy, who is waiting for my reply, and so I begin to speak: "Yes. I agree to some extent.", I say, as he smiles and probably anticipates my conversion. "But you know, if you look at it from an Islamic perspective, we just talk about this one entity that holds the entire universe together and keeps expanding it. Many people still have this misperception that Allah is the "Islamic God", when Allah is just the Arabic word for God and is used by Christians and Jews in the Arab world as well. As a matter of fact, the word "Allah" derives from the word "Elohim" in Hebrew, which you also find in the Thora, of course, since Arabic and Hebrew are both semitic languages, you naturally have a lot of similarities. And can you believe that there are still people who think that Jesus is exclusively a Christian thing and Mohammed is an Islamic thing, when in fact Jesus is mentioned in the Quran more often than Mohammed and is a prophet that all Muslims love?!  You know what I mean?"

After preaching back for a few minutes, the Witness of Jehova has had enough of me and escapes, and I can now finally focus on my notes. I begin to recall some of the things I have experienced on this trip so far, like the night when I reunited with Chris and when his mother said: "Never forget", referring to the most important quote from the Quran. A few nights later I already forgot. It was a wild, final night in Hollywood. Here in Melbourne I decide to take it more easy. 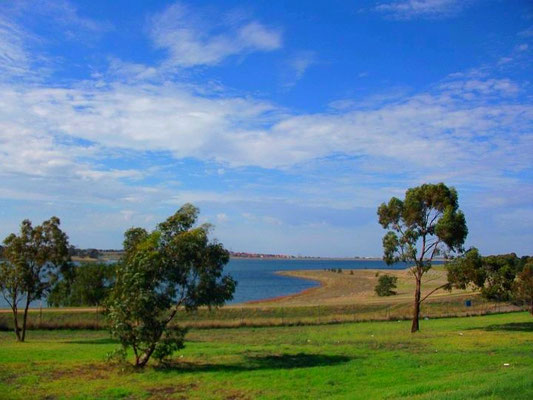 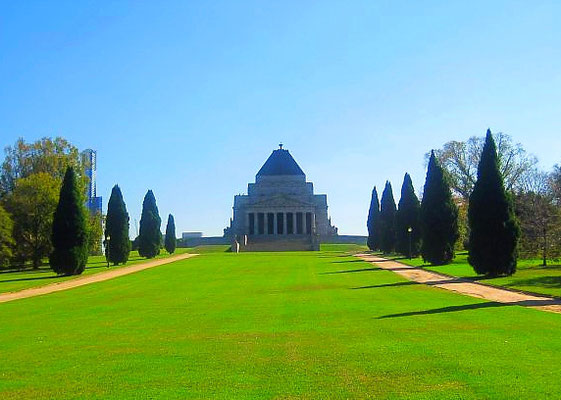 "Will you come with me to the mosque?", the husband of my cousin asks me the next day. Although, so far, I have only prayed once on this trip and I pray rarely otherwise, I cannot say no and join him. Trying to remember the right positioning, not much later I stand in front of the Minbar inside the mosque, which signalizes the prayer direction for Muslims based on where Mekka is located, the holiest place in the Islamic world, which every Muslim is supposed to visit one day, as long as he is capable of doing so.

The following days I continue to explore Melbourne,  enjoying the Yarra River Cruise that allows me to have a closer look at Herring island, the artificial island that I saw from the Eureca Skydeck, and thereafter heading to various spots with my relatives such as Greenvale, the Royal Botanic Garden, the Coburg Lake Park, where we have a picnic before spending a lot of time at one of Australia’s largest war memorials, the Shrine of Remembrance, which is dedicated to the Australians that served during World War I. On a more quiet day I decide to relax at St. Kilda Beach, located at the Philipp Port bay, which for 40000 years used to be the home of three clans of the Aborigines before the British imperialists arrived. And of course, my first time in Australia would not be complete without visiting the Melbourne Zoo, where we spend a full day observing Australia's most venomous snakes and spiders, Koala Bears and other animals, before ending this fun day feeding Kangaroos. 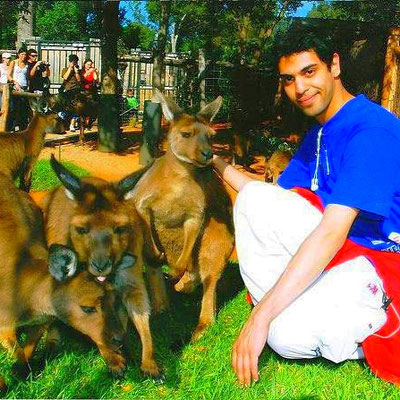 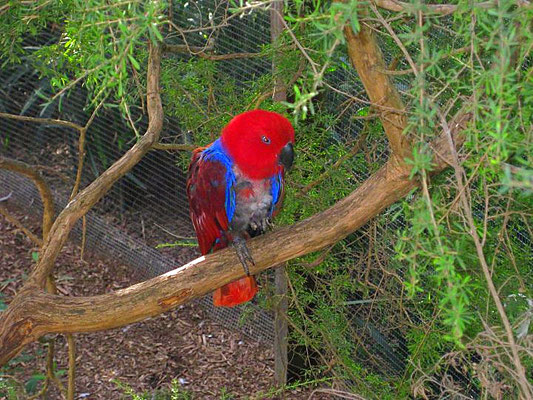 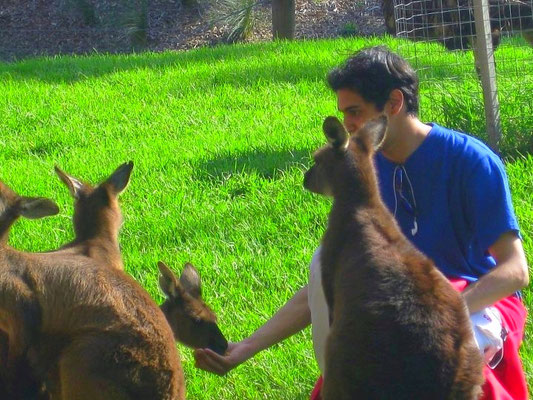 On my last day in Melbourne I spend some time with my cousin and her family, while watching TV. Saleem talks to some relatives in Pakistan on the phone. "Of course I know what's going on in Pakistan better than you. We have electricity and access to the news!", he jokes. Once he hangs up, he informs me that there was another terrorist attack in Pakistan with dozens of casualties. "Again?" - I remember the news that I saw in Alexandria when we were watching TV at Billu's place. "Just two weeks ago there was this terror attack in Peshawar killing over fourty people". Meanwhile in Europe several airports, including the Frankfurt International Airport, are not accessible because a volcano has erupted in Iceland, we learn from the TV news. Originally, Iceland was scheduled to be the very first destination of the around-the-world trip, because it was initially offered as a free stop-over on the way to New York. Unfortunately, after my second visit, some changes had to be made. And fortunately, I decided not to start but to end my around-the-world trip in Europe, where right now many flight passengers are facing a hard time.

The next parts of the journey should be planned very carefully, because I have spent as much time in Australia now as I will be spending time in the next three countries combined. From now on everything will go so fast. I better get used to all the things that travellers have to take care off, to make sure that the passport is in a safe place, that the camera is charged, that I have a copy of the pictures I have taken, and that I know how to easily get to the places where I want to sleep. With my cousin, who is still that funny, positive and talkative girl like 14 years ago, I have a chat, and much like in our childhood, I tease her a little bit. "Don't forget, you have no health insurance!", she warns me jokingly, before we talk about my next destination, the first country in my life, where I will be all by myself, without any friends of relatives living there. “Do you have a plan B?”, she asks me then, wondering what I do if I miss one of the flights or if anything goes wrong. "No.", I simply reply